I find myself as a caretaker for my wife in a wheelchair, moving at the speed of woman. Now I know why women take so much longer to get ready to go out than men—things I really didn’t want to know. And Laurie is actually low-maintenance compared to most women. For me? Put on my shorts, a shirt, and sandals and I’m out the door, but my wife, well, you married men know what that’s about. Not complaining, but I feel I’ve just solved one of the mysteries of life for men. Next, I’m tackling why men can’t find anything in their wife’s purse.

We listened to the song, “10,000 Reasons” (Bless the Lord) by Matt Redman this Sunday morning; I’m about to say something pretty sappy about it: I had goosebumps down to my heart. I warned you. I believe one of the lines speaks of praising God in heaven and goes something like, “10,000 years and then forever more.” It speaks to me of permanence. We left Portland four weeks ago with two backpacks and a suitcase full of meds for old people, like pilgrims passing through this world. Won’t it be great when our pilgrim days are over and the “forever more” begins.

Even following American politics from a distance, it’s plain to see one party is preparing for the mid-term elections with a “lights-out” surge toward naked socialism: reparations for African Americans, income handouts, guaranteed jobs, and other redistribution of wealth schemes.

I personally have had some second thoughts recently about my hardcore opposition to what I’ve seen as the “erosion of American capitalism.” Since my post-hippie days, I’ve worked hard all my life, mostly as a pastor and missionary, now defrocked, and later at a variety of low-skill jobs to make ends meet, but have little to show for it, at least on the financial side. We lost our home in the 2008 crash, but mostly because of losing my thirty-year career as a preacher, and we have never recovered financially.

Now, before you think I’m hitting you up for a “fund-me” campaign,

I’m just trying to set you up for what I want to say next about socialism. Living now off my social security and a VA pension, and with my wife disabled from a stroke, the thought of a guaranteed living wage, universal health care, and other government handouts, not to mention the possibility of less pop-up advertisements on my laptop, well, it’s all very appealing. Those who are younger, skilled, and able to earn greater amounts of income, helping those on the other end of things, from where I’m sitting, that’s looking pretty good.

Until recent stories like twenty-three-month-old Alfie Evans from the U.K. surface from time to time. Alfie was born with an undiagnosed degenerative neurological condition and was living on life support. The doctors gave him no chance for recovery and chose to disconnect him from life support. So, the parents wanted him removed from the Liverpool hospital to a Vatican hospital in Rome, with the Pope’s blessing. The Italian government even made the extraordinary gesture of granting Alfie Italian citizenship, so he could freely fly to Rome. But the U.K. courts and the European Court of Human Rights denied Alfie’s parents the right to do so and instead have offered Alfie a “dignified and compassionate” death at their own hospital. After he was unhooked from support, he died just today.

So there’s the bait and switch. Socialism comes garbed as the ultimate solution to inequality, suffering, wants, and injustices of all natures. And who doesn’t want that? But with this “benevolent compassion” comes a hook: the loss of many basic personal freedoms.

If only socialism was the large-hearted, philanthropic system its promoters claim it is, but it isn’t, it’s a decoy. With the powers to supply all one’s needs, come the powers to dictate what is deemed unlawful speech and how many official genders exist. Swedish daycares are experimenting with boy toddlers wearing dresses and given dolls to play with, while girl toddlers are given G.I. Joes and toy trucks, in hope of breaking down the “unnatural stereotypes of the genders.” Are these the people we want imposing the limits on religious expression and what kind of car we can drive? Because these are the same people that denied little Alfie’s parents the right to remove their sick child to a religious environment, where they could find comfort, solace, and hope of a miracle.

William Shakespeare in King Richard III said it best in the words of his lead character:

“And thus I clothe my naked villainy,

with odd old ends stolen out of holy writ,

And seem a saint, when most I play the devil.”

This was our second Sunday at the Cornerstone church. The pastor taught on Abraham being tested, when God asked him to sacrifice Isaac on Mt. Moriah, the same mountain Jesus would be sacrificed on for our sins many years later. And just as God supplied a substitute for Isaac with a ram, Jesus was the substitute for us on the Cross.

Abraham was changed forever after his experience on Mt. Moriah. God changed the world with His Son’s sacrifice on Mt. Moriah. Abraham didn’t know much about God at this point, just that He was a good God. He didn’t know how God would intervene, but he believed God’s promise that through Isaac He would multiply Abraham’s seed as numerous as the stars in the heavens.

I’ve seen a side of God I hadn’t seen before. 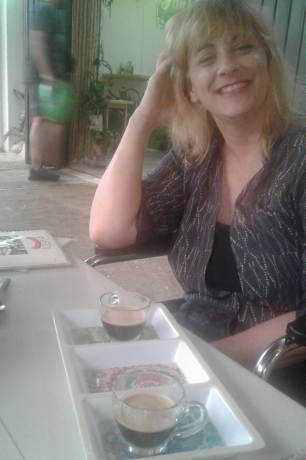 Going through this experience with my wife’s stroke and not knowing how financially, mentally, and spiritually we’re going to make it has changed me.

God spoke to me: “You take care of Laurie, and I’ll take care of the rest.” Anyone who knows me knows I’m not the caretaker type. I didn’t realize how selfish I was. It wasn’t so hard giving to people what I want to give them, which made me feel good about myself. But to give to someone what that person actually needs is another thing. He’s given me a deeper love for Laurie, and there’s a joy in serving her, which I know has to be from God.

Laurie says she never knew or felt how much God loves her since having the stroke. She was never able to receive God’s love before, not like this.

A former pastor and missionary for over 30 years and now an author of two novels, Alan Kern lives with his wife Laurie, who is convalescing as a stroke survivor. They live on Oregon’s spectacular northwest coast, where they continue to plot more books on historical fiction, time-travel, romance, married love, disability, spiritual abuse, and non-religious Christianity. View all posts by Alan Kern Books

2 thoughts on “Open to Change”