Yesterday, Laurie and I made our first visit across the bay to the island of Cozumel.
Half hour by ferry—they say if you’re prone to seasickness you shouldn’t worry about this trip. Half way across, I asked for the plastic bag, but thankfully, I didn’t need it. We went there for Laurie’s neurologist’s visit, but we had been given an incomplete address and several taxi drivers I spoke with had no idea where the doctor’s office was. So, I approached a police pickup and inquired. They didn’t know either, but they invited us onboard while they drove around and figured it out. And they did, getting us to the doctor with five minutes to spare. I reciprocated by buying the three of them lunch. 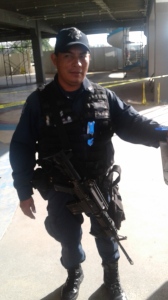 Afterwards, we taxied the twelve miles to Punta Morena, on the far side of the island, away from the tourists, much less developed, but far better beaches and ate fifty feet from the crashing waves. Laurie was in beachcombing heaven. On the ferry back, Laurie rode on the upper deck with the wind blowing through her hair, while I chose to read “The Good Years” by Walter Lord in the a/c, cushioned seats down below. I’m not sure where the term “Montezuma’s Revenge” came from, I’ll have to look it up.

In the gospels, there’s a scene where Jesus’ disciples want to know who will be greatest in the Kingdom. Jesus takes a child and sets him on his lap for a demonstration. Children in that culture were not viewed as they are today, like treasured things that adults revolve their lives around. In that day, children were not valued much at all. Another thing about children is that there isn´t one thing they can do, good or bad, to increase or decrease their parent’s love or position with them.

So, there were at least two reasons Jesus used the child to demonstrate God’s love. One: Jesus is not looking for the high and mighty who wear their blue ribbons of religious activities like prized bulls at the county fair. He’s far more interested in those whose halos are a bit tarnished, bent up out of shape, cracked, and occasionally sliding off their heads, but He has their heart. Also, God isn´t judging us by our perfections or imperfections but by His unchanging perfect righteousness that He is freely given to us.

Maybe this isn’t much of a revelation to you, but for me, having come out of a legalistic church group after thirty years, where you were judged by how many times you punched the time clock for church attendance, it is this grace that I desperately need. I remember part of a praise song from those days that went like this: “I have climbed up, that much higher, in that good old Gospel way.” Since we never heard any sermons on grace, it never occurred to me that you couldn’t climb up higher. They did, however, mock a church across town called “Grace Chapel,” for having “greasy grace.” But I need that grace, and I don´t care how greasy it is. In fact, I´ve got a lot of ”greasy grace” to catch up on, because my halo of self-sufficient religiosity has taken a hit.

If you´ve been battered by life’s circumstances, at least you know you’re in good company with millions of saints that have gone before. In fact, the godliest of them all suffered the most rejection, abuse by religious Pharisee’s, family rebuffs, misunderstandings, slander, betrayals, not to mention physical torture and death. Now, there’s a happy thought.

So, man up Buckwheat, the best is always yet to come. This world is passing like a comet, never to be seen the same again. Those who are clinging to it as if it’s the greatest necessity in life will be the ones holding onto empty hopes and dreams. Our hope is unfading, untarnished, unblemished, “which is reserved in heaven for us, that is beyond the reach of change or decay.” 1Peter 1:4