When a Christian suffers, is it because he has sinned and needs correction, or are there other reasons that are far more probable? The best example given in God’s Word concerning suffering and trials is found in the Book of Job. Job lost everything he had, his possessions, his family, and even his health. There are some who believe that when a Christian suffers, it is because God is correcting them for some unconfessed sin in their lives. Although this can be true, it is far from the most common reason. Usually, the suffering, mature Christian has no idea why he is experiencing a trial. If he did, the growth he could gain in faith would be lessened, so God often allows the saint not to know the “whys.”

Job is the story of a good man suffering for no apparent reason. In contrast, the Apostle Paul suffered for his “thorn in the flesh,” knowing that it was to keep him from becoming overly puffed up by all the revelations he was receiving. We know this because Paul specifically asked God about the “whys,” and God told him. We know that David lost his child that was born to him from his adulterous relationship with Bathsheba and because he murdered her husband.  This time, God told him that the child’s death was punishment for his sins. And the sin in the Garden, well, we all know what that cost our first parents.

But outside of these examples, I know of no other instance in the Bible where God explained to a godly person why they were suffering. So, why did Job suffer the loss of everything? I believe one reason was that he was the perfect target for Satan, not because of sin, but because of his righteousness, and God had confidence that Job was badass enough to handle it. 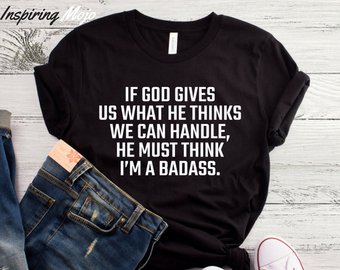 His trial was not punishment or correction, but a back-handed compliment from God that he was up for the challenge, and that forever he would prove as an example of how godly people should respond to tragedies and other distressing situations in their lives. An additional reason, I believe, was to be a witness to unbelievers of the reality of God and his faithfulness, even in the worst of circumstances. And as an aside, that when the devil boasted that Job would curse God to His face, it had to be satisfying for God to put it back in the devil’s face instead.

I believe another reason for Job’s ordeal was so that God could confront his “friends,” and their legalistic, judgmentalism toward Job. Often times, the worst part of a righteous person’s suffering is the condemning attitude of the very people that should be a comfort to them. Finger-pointing, pharisaical, self-righteous critics, who apparently believe the Holy Spirit has retired and has appointed them as His replacement, only increase the believer’s misery and often leads them to self-condemnation and isolation. The more mature you are, the more likely God lets you experience trials that have nothing to do with you, but He allows them for the sake of others.